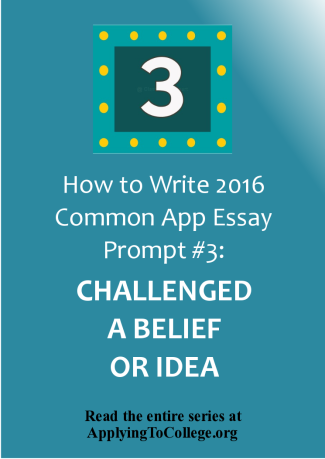 How do you choose which Common Application essay to write?

In this 5-part series I help you figure out which 2016 Common Application question is right for you.

Reflect on a time when you challenged a belief or idea. What prompted you to act? Would you make the same decision again?

Is This Prompt for You?  Look at the Keywords:

“Challenged a belief or idea” …“Prompted you to act”…”Would you make the same decision again?”

When Should You Choose This Essay?

Answer this question ONLY IF:

What are Colleges Looking For?

Colleges are looking for your critical thinking skills. Show them your thought process (the steps you took to make your decision) and then reflect on your experience (which will show them maturity and insight).

Not Sure this Question Relates to You?
Here are 3 ways you might answer this question:

What Other Kinds of Beliefs or Ideas Can You Consider?

Which brings me to:

Should you write about religion? You can. I’ve had students who’ve written about different aspects of their spiritual journey, whether it was trying to conform to their parents’ religion or searching for their own truth. But remember the caution: You don’t want to offend your reader. So along with topic choice, consider the tone of your writing. For instance, it’s a lot different to say you felt a need to find your own spiritual path than to say you hated a specific religion and couldn’t wait to get out of there.

Tip from College Admissions Officers: Some admissions officers tell me that many essays about spiritual journeys are starting to sound very similar to them. So if you want to write about your spiritual journey, find an original approach that makes your essay stands out. If it starts to feel generic, dig deeper into who you are and how this topic reflects your values, your ability to problem solve, or your goals. (Give the colleges good reasons to want to admit you.) If you’re not sure it will stand out, switch topics.

Example of a Successful Essay Topic:

A student’s elementary school teacher wasn’t a kind woman and picked on many of the children in her class. As a result, the student’s self-esteem suffered and her grades dropped. It took a long time for the student to learn to stand up for herself, but when she finally did she started to excel. In high school, she became a leader and mentor and spoke to teens about how to combat bullying. She taught them the harmful power of words, and how to use words in a positive way.  In her essay she explained why she would make the same decision again: “My passion for making a difference stems from my own experiences where negative criticism created a lasting effect on me…Becoming emotionally and physically independent and having the confidence to challenge social norms have become the most powerful tools in my possession.”

Is This Topic Successful? Yes.

Reasons Essay Prompt #3 Can Work for You:

Tip: It’s okay to say you wouldn’t make the same decision again. Colleges want to see that you have the maturity and perspective to understand your actions.  Just remember—by the end of the essay you should be saying positive things about yourself.

For more information on the Common Application visit their website. They also have a very helpful Facebook page.

Next time: How to Write Common App prompt #4.

Sharon Epstein is owner of First Impressions College Consulting in Redding, Connecticut. She is a Writers Guild Award-winner and two-time Emmy Award nominee. First Impressions teaches students how to master interview skills, write killer resumes, and transform their goals, dreams and experiences into memorable college application essays. We work with students everywhere: in-person, by phone, video and email. Visit our website for more info. Connect on Google+, Pinterest and Twitter.

One thought on “How to Write 2016 Common Application Essay #3: Reflect On a Time When You Challenged a Belief or Idea”