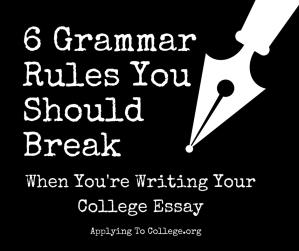 The other day I told one of my students she could use contractions in her college application essay.

“You can do that?” she asked. “I’ve always been told not to use contractions.”

Your college essay isn’t an English paper. You’re telling a story. You’re writing in your own voice. You’ve got creative leeway.

Now to be fair, grammar rules are important. They help us clearly express what we want to say. They allow us to reach our reader in an effective way.

But it’s a big, creative world out there.

Look at me, for example. I wrote dialogue for soap operas. My characters didn’t avoid slang or contractions. If I wanted them to say, “Are you friggin’ kidding me, Alice? I’m outta here! I’m getting a divorce!”—they said that. I love how words sound and how I can combine them to make an impact. This is my style. The college essay is your style.

So welcome, creative traveler! You’ve landed in the territory of self-expression. This is where you get to tell your story. And to do that, I’m going to suggest you break a few rules.

6 Grammar Rules You Can Break While You’re Writing a Great College Essay:

1. Use Contractions. Your essay should sound like you’re telling a story. It should be in a conversational tone. We all speak in contractions, so go ahead and use them. (Although, I avoid “would’ve” and “should’ve” because I think they’re too casual for college essays.)

I needed to find a new way to study. Because mine wasn’t working out.

The mountain was the tallest I’d ever seen. Which is why I knew I had to climb it.

I finally remembered the answer. After the test had ended.

3. You Can Start Sentences With And, But and Or. Want to start a sentence with a conjunction? Go ahead. In fact, you’ll be in good company. Here’s a quote from the Chicago Manual of Style, a guide that’s widely used in publishing:

“There is a widespread belief—one with no historical or grammatical foundation—that it is an error to begin a sentence with a conjunction such as and, but or so. In fact, a substantial percentage (often as many as 10 percent) of the sentences in first-rate writing begin with conjunctions. It has been so for centuries, and even the most conservative grammarians have followed this practice.”

This type of change often makes a sentence sound more formal. College application essays, though, should be more conversational, and that’s why ending sentences with prepositions is okay.

5. Use I. You probably know you should use “I” when you write your college essays. But it’s not always easy to write in the first person, especially if you’ve been taught not to voice your personal opinion. It can feel uncomfortable to make that transition.

Are there places you disappear from your story?

You can disappear from your story if you write in the third person. For example, if you write, “A change in study habits was needed,” you’ve taken yourself out of the sentence. It feels like you’re a distant commentator, the outsider looking in. Put yourself back in your story. Use I. Instead, of saying, “A change in study habits was needed,” say, “I decided that I needed to change my study habits.” And don’t be haunted by the third person.

6. . One-sentence paragraphs can be amazing.

So, traveler, you’ve arrived in the territory of self-expression. You’ve traveled here to tell your story. You’ll still follow some important grammar rules: you’ll use descriptive words, choose the active voice, and make sure your subject agrees with your verb. But it’s time to stretch those creative limbs. And if you’re still not sure breaking these grammar rules is the right way to go, just open up one of your favorite books, by any good author, and read a few paragraphs. Some grammar rules are meant to be broken. So go right ahead.

Sharon Epstein is a Writers Guild Award-winner and two-time Emmy Award nominee, teaching students around the world how to master interview skills, write resumes, and transform their goals, dreams and experiences into memorable college application essays. I work with students everywhere: in-person, by phone, FaceTime, Skype and email. Visit my website for more info. Connect with me on Google+, Pinterest and Twitter.